The Central Character is René, the owner of the “Café René” in France during the second World War.

René’s entire life is a series of balancing acts between his relationships with his wife, (whom he does not fancy), his waitresses (whom he does), the occupying Gestapo (one of whom fancies him), an Italian (who fancies anyone female), two British pilots who just want to go home and the French Resistance who constantly put his life in danger. 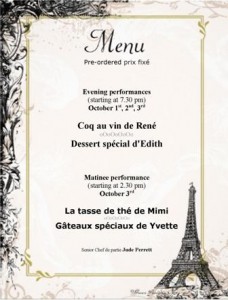 There is a radio, shaped like a cockatoo, for contact with British Intelligence, and a valuable picture of the Fallen Madonna with the Big Boobies by Van Klomp, which everyone wants to get their hands on – hence a large number of fake copies distributed in sausages around the café.