Anniversary Talk: The war of a D-Day dodger – The campaign in Italy 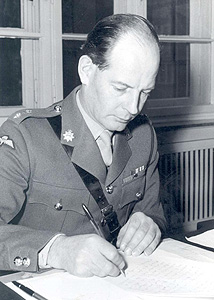 Col. Toby Sewell, a regular soldier, served in Italy during the war from November 1943 until May 1945 with the Queens Royal Regiment. He was wounded and twice mentioned in despatches. The campaign in Italy was one of the toughest in the war (think of Monte Cassino) so the soldiers were not best pleased to be described as D-Day Dodgers… Here are two verses of the (ironic) Ballad of the D-Day Dodgers which they composed (tune Lilli Marlene):

Eighth Army scroungers and their tanks, We live in Rome – among the Yanks.

We are the D-Day Dodgers, over here in Italy.

We landed at Salerno, a holiday with pay; Jerry brought the band down to cheer us on our way

Showed us the sights and gave us tea .We all sang songs, the beer was free.

We are the D-Day Dodgers, way out in Italy.

This talk is at the Haslemere Museum