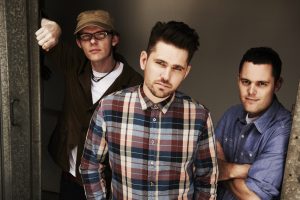 Exclusive “Early Bird” tickets are now being promoted on the website – www.lionfest.co.uk – and offer up to an amazing THIRD off the gate price for a limited time, with children under 10 admitted free! Tickets are also available direct from Haslemere Hall – 01428 642161 or online at www.haslemerehall.co.uk

The Fringe is delighted to announce that the Saturday Night Headliners will be the ever-popular Scouting for Girls – the famous indie rock band formed in 2005. Scouting for Girls consists of three childhood friends – lead vocalist and guitar player Roy Stride, Peter Ellard on percussion and Greg Churchouse playing bass guitar, who have grown up into pop legends. Their self-titled debut album sat at No. 1 in the UK charts for two weeks and produced several hit singles including Elvis Ain’t Dead and She’s So Lovely, followed by another two UK chart top 10 albums.

Scouting for Girls have been nominated for a number of top awards during their career, including four BRIT Award nominations and have evolved into a national institution!
Another amazing artist confirmed for Saturday night is singer-songwriter, Lucy Spraggan, who has netted her fourth top 40 album and followed that success with a huge tour across the UK and Europe in 2017.  Lucy appeared on The X Factor in 2012 and her original audition has been viewed more than 40 million times! Since then, Lucy has become renowned for her song-writing and lyrics, where pop and acoustic folk meet the punchy riffs of traditional R&B.

Sunday’s Headliners are the original, multi-million selling soul band, The Real Thing, ready to deliver a funky show with a strong retro flavour featuring their much loved, classic Disco mega hits such as “You to me are Everything”, “Can’t get by without you” and “Feel the Force” all mixed with contemporary grooves! Boogie down to all the hits, plus some fantastic covers such as “Ladies Night,” “Celebration,” “Good Times,” and “Ain’t no stopping us now” – in an action-packed performance to remember!

Another stellar signing, performing on Friday night is REWS – the London/Belfast based high-energy alternative rock duo consisting of songstress Shauna Tohill and vocalising beat-rocker Collette Williams. Together, they create high energy, infectious alt rock, described by Team Rock as “melodious but badass”. The pair have performed at a string of high profile festivals and international showcases and their debut album “Pyro” is out now.

As well as cracking Headliners, the Fringe prides itself on promoting up-and-coming artists and has a history of breaking new acts – such as the fabulous Ward Thomas, now enjoying world-wide fame! – and introducing amazing young talent from local schools, clubs and societies.

The Fringe attracts thousands of visitors from across the three counties and offers an eclectic and dynamic mix of live music, dance, drama, arts, crafts, performance poetry and hysterical stand-up comedy to appeal to people of all ages and stages in life. All new acts will be announced on the Fringe website – www.lionfest.co.uk – as well as being promoted on Facebook and Twitter.

The Fringe Festival Village showcases a wide variety of stalls from local businesses, artisans and craftworkers and includes a delicious range of hot and cold food from local suppliers. Refreshments will be available at The Lion Bar, Sports Bar and Pimms Bar.

This fabulous biennial event, organised by members of the local community, attracts thousands of visitors across the Three Counties and beyond and the partner charity for the 2018 Fringe will be The Royal British Legion, dedicated to the memory of the fallen and the future of the living – providing lifelong support for the Armed Forces Community.

The Fringe is a not-for-profit charity event, run and supported entirely by a wonderful volunteer network from the local community and beyond. The Fringe also needs support and sponsorship from local businesses and, of course, local traders to hire a Stall space to promote their business and sell their wares. If you would like to volunteer to help, become a sponsor or hire a stall, please go to the Fringe website – www.lionfest.co.uk and come and join The Fringe Family!