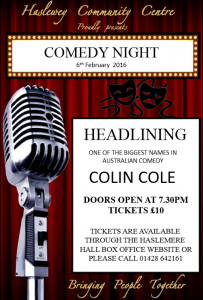 After the success of our last Comedy night in 2015, we are proud to announce the second in line, of what we hope to be a series of comedy nights at Haslewey.

Colin Cole – Headliner
Colin is literally one of the biggest names in comedy in Australia – not only is he 6’7” but he is also known for his hugely dynamic performance. His delivery is fast and furious, and his material ranges from the topical t observational. His TV credtis read like a “guide to Australian television” and he is now taking the UK by storm.

PRESS
“He mesmorised the audience, they only took their eyes of him to laugh.” – Melbourne Age
“One of the most exciting performers to come out of Australia.” – New York Times

Andy Stedman – MC
Andy is the resident MC at Hasleway, cleverly mixing songs and audience banter whilst ensuring the crowd are feeling comfortable, amused and excited in readiness for each act. Originally from Farnham, Andy was a singer/songwriter of no repute before moving into comedy!

PRESS
“I don’t want to over-use the adjective ‘great’, but Andy was a great compere.
“He connected with the audience and wrote two songs for a couple who had been dating a week… Very very funny comic.” – Martin Mullaney, Comedy CV
“Stedman’s voice is sure to melt hearts.” – Uncut Magazine

Tamar Broadbent – Opening Act
Tamar Broadbent is a comedian, singer, actor and award-winning songwriter, who studied English at Bristol University and went on to train at the Central School of Speech and Drama. Her song ‘Patrick’ was featured on BBC Radio 4’s Fresh From the Fringe 2014, a showcase of the best new comedy acts from the Edinburgh Fringe Festival.

Her Edinburgh show in 2015 was a huge success, with original slice of life songs interspersed with charming chat and the occasional shocking moment.

Matthew Bayliss
Matthew has travelled the globe with his own unique brand of unashamedly middle class comedy. He has gigged with Harrry Hill ,Milton Jones, Andy Parsons, Reg D Hunter and many more across comedy clubs and festivals in the UK as well as New Zealand, Australia and South Africa. As a father of six he draws much of his humour from tales of parenthood which ring true with audiences of all ages.

PRESS
“His mixture of ticklingly dry wit and razor sharp crowd-work kept the audience feeling as if they were indulging in their favourite guilty pleasure.” – The Gazette

Chris Chopping
Chris is a Cardiff based comedian, bringing his engaging anecdotal style to audiences around the UK. He regularly contributes to Jamie Owens’ BBC Wales Radio show and is a fast-rising star to look out for.

Kieran Walshe
Kieran is our new act of the evening doing a short set. Each comedy event we share with you a promising act from the circuit , we hope you enjoy his act.