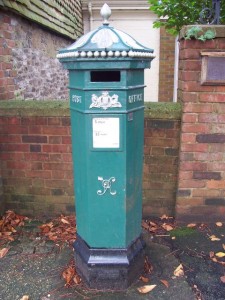 Bernard Coe, President of Haslemere Museum, will summarise the outstanding achievements of three of our distinguished residents – and of the splendid Red Cow Inn.

Sir Archibald Geike, OM, was a distinguished Geologist (and President of the Royal Society) who moved to Haslemere when he retired in 1913 and became President of The Haslemere Natural History Society.

Robert Lochner moved to Rats Castle on the Linchmere Road in 1939. He was co-inventor of the de-gaussing skirt that protected ships from magnetic mines, but is best known for inventing the Mulberry Floating Harbours for D-Day.

JW Penfold was the architect for the rebuilding of St Bartholomew’s Parish Church in 1870. However he is best known for the design of the Penfold (hexagonal) post box, painted a dark bottle green – a magnificent replica of which can be found outside the Georgian House Hotel.

Finally, the Red Cow Inn appears because in 1754 the property was notoriously sub-divided to create more votes for the More-Molyneux family when they (successfully) stood against James (later General) Oglethorpe for Parliament.