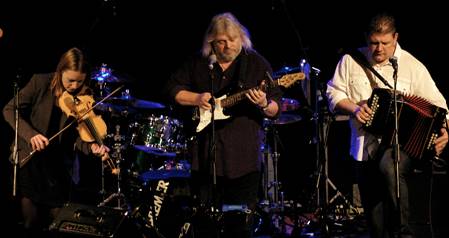 The Phil Beer Band evolved organically in the early to mid 90s at Maisemore in Gloucesteshire. It was a loose federation consisting of Phil Beer (Show of Hands) Nick Quarmby and Steve Crickett, all of whom lived close to each other, and melodeon player Gareth Turner from Northamptonshire. There was a need in the community for a band to play local events and ceilidhs and, following in the tradition set by the Albion Band (of which both Gareth and Phil were former members) the band always interspersed the dances with the odd song.

Basically, over a long period of time, it has evolved into a ‘Folk n Roll’ band with country rock overtones. It is the vehicle for Phil to return to the electric guitar and to have a good time with his mates. The band has seen many members and many tours but has been fairly inactive in the last five years. That’s about to change. The Band’s first full tour for a long time takes place next May with a new studio album in place. They look forward to seeing you then.