AND THEN THERE WERE NONE 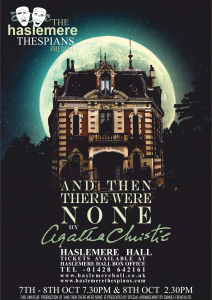 A wonderfully crafted Murder Mystery by the “queen of thrill herself” Dame Agatha Christie, who was compelled to pen the gripping tale because it was such a “difficult plot to write effectively that the idea fascinated her”. It’s also an ideal way to celebrate the 125th anniversary of her birth.

Selling over 100 million copies worldwide, it is THE bestselling murder mystery to date! It was also adapted into a hugely respected TV mini-series by the BBC, starring Aidan Turner and Charles Dance. Dame Christie remains to be one of the foremost authors of all time and is only outsold by Shakespeare and the bible, with her popularity ever growing.

“And Then There were None” sees a group of strangers lured onto a remote island off the coast of Devon by an eccentric millionaire who now appears to be missing. They soon discover they are all there under false pretexts and are subsequently “charged” with their respective “crimes” and their guilty secrets revealed. Gradually the guests begin to be “killed-off” in turn, in a manner that seems to parallel the ten unusual deaths in the nursery rhyme “Ten Little Soldier Boys”, that hangs on the wall, (not its original title). Having thoroughly searched the island and knowing the fallen are therefore innocent, they become acutely aware that one of them must be the culprit. Trapped by a torrential storm and haunted by the child’s rhyme, the race is on to find the killer and escape the island. The excitement never lets up in this enthralling, superlative and dark mystery comedy.