THIS EVENT IS IN THE HASLEMERE MUSEUM GARDENS. 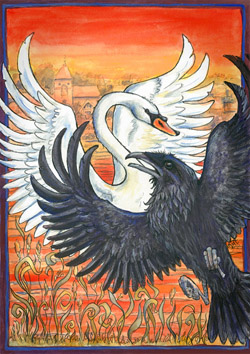 ‘Macbyrd’ is a comedy thriller, set in 1940, about the changes to a small village in rural Sussex, Jevington, brought about by the threat of invasion, it’s impact on the local WI, the cricket club, the village play, and on relationships, and on how with the war people must take on new roles. There are two stories which link together. Up above there is a power struggle among the birds and the swan, symbol of a certain kind of traditional Englishness and social structure, is murdered by the upstart raven, Macbyrd, who resents the swan’s snobbish disregard for the poor, the sparrows. Pete Talbot, the writer and director, says, “There are, it has to be admitted, a few echoes of a certain Shakespeare play. Macbyrd is told by the ‘gypsy magpies’ that his time has come, that ‘sleek birds, black against the sky’ will rule. In fact change to the village is because a momentous event is going to happen – and I’m not going to tell you what!” Prejudice amongst the ‘oomans puts the death of the swan down to gypsies and among the birds to a foreigner, a rare Indian bushlark which has been swept in by storms. Here’s the serious bit. In the same way that Hitler represented a threat to our values, so too in people’s perceptions do other things today. How do we deal with those ‘threats’ and what indeed do our values really consist of and how should we adapt in the face of change? Inevitably base instincts like prejudice surface. In this cauldron of change the play explores the values of ordinariness (the heroism of living an ‘ordinary’ life as part of a community), leadership, love and adaptivity that remain constants in difficult times. The comedy is partly in the absurdity of the birds’ world, but also – and it is a comedy of manners – in the ways of ‘country folk’. So there’s a bit of Foyle’s War about it and a bit of ‘The Archers’ – plus quite a bit of The Rudes, too

The stage is set in the gardens of the Haslemere Museum with a picturesque outlook over Black Down. Bring your own chairs and warm clothes. It can get cold. Open an hour and half before the show starts. The show is aimed at adults, but mature children will enjoy it. Do not bring babies. However much we love them, they do distract. We do not continue in heavy rain. If the show is cancelled before curtain up money will be refunded; if we cancel once the show is under way money will not be refunded, but you may come free to any subsequent performance as long as you re-book.

THIS EVENT IS IN THE HASLEMERE MUSEUM GARDENS.