This event is in the HASLEMERE MUSEUM GARDEN 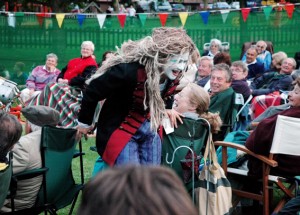 Come and join us, bring a picnic and a bottle of something to enjoy, whilst you soak up the atmosphere of not only the play, but also the wonderful setting of the Museum Garden.

The Rude Mechanical Theatre Company, have been creating original theatre inspired by the traditions and style of Commedia dell’Arte since 1999. They are professional actors best known for their outdoor summer touring across the village greens of Southern England.

For Haslemere, they will be putting on a production of ‘The Wife’ based on Chaucer’s The Wife of Bath.

What do women really want? Well there’s a question! Is there one man who has not asked it?

Alyson, a wife from Bath is travelling to Canterbury on a pilgrimage and describes with hilarious outcomes the five men who have shared her marriage bed. Then she tells the story of a young knight called Roland who having ravished a young maiden is forced, in order to avoid being put to death for his crime, to undergo a test and search the world for an answer to the
question: What is it that women most desire?

With his stupid but rather innocent servant Dogrose, he encounters a series of marriage relationships and asks each of the women the question. It seems none of them agree – until finally he encounters an old crone and she tells him the true answer, but only on condition he will do anything she asks of him. The play comes dramatically to a conclusion as the answers are revealed. Hilarious, but also deeply poetic, the play digs deeply into the nature of love and marriage relationships.